Underdevelopment’s description parallels that of war: Boredom punctuated by moments of terror and disaster. Brazil’s ongoing drama is tedious and interspersed with tragic events, most man made. Rio’s recent gang rape, for example, brought many to the streets with social media talking about the country’s culture of rape, misogyny, machismo and failure. Many were quick to identify the ongoing weaknesses (lack of security, education, police and on and on). Some are trying to solve the problems through social organizations, marches and postings. Others are just pulling up stakes and, once again, leaving Brazil for supposedly more “advanced” civilizations.

In some ways, Brazil’s problems pale in comparison to the US with its culture of guns and mass murders. The Orlando massacre is only atypical in the number of deaths and wounded. Reportedly, there have been mass murders on a daily basis for over a year. To outsiders, the United States seems at least as dangerous as a stroll through the Morro do Alemao favela (slum) late at night.

Many Americans often deflect criticism by blaming individuals and not the culture. They say Trump’s inflammatory rhetoric or Obama and Hillary are to blame for engaging in wars and covert activities. It’s true that U.S. residents love their guns and it’s become easy and routine to buy lethal weapons such as the assault rifle used in Florida. Brazil has strict legislation seeking to control arms and severely limits the legal carry of guns. Still this does not stop drug traffickers from having their AK-47s and other restricted weapons of intimidation.

We can blame the law, the administrations, the government and whoever for failures and being wrong headed. But the problems, in the US and Brazil, have similar roots. We accept, live with and passively tolerate violence, murder, rape and mayhem and do not want to curtail our individual liberties or take responsibility for changing our cultures. It is complex.   Religion, institutions, social and economic factors also shape culture. And the tension between the individual and his reference groups (family, religion, sport team, etc.) can often lead to individual and even collective pathologies. To live in modern times is to be faced with deep contradictions.   Peace and harmony exist as an ideal. But this ideal breaks down as individuals seek greater liberty, freedom from control and self-expression. Religion and culture intertwine where group membership provides a sense of oneness and belonging. Individual autonomy also lead many to nihilistic actions covered with a veil of religious and collective justification. The shooter in Orlando apparently called at the last minute to vow allegiance to the ideology and actions of the so-called Islamic State, yet there is no evidence as of yet of his affiliation.

The rapists in Rio, in turn, appear to be gang members or friendly associates.   They are young men seeking self-satisfaction and approval of the group. Their motivation ranges from lust, to being power hungry, to being powerless, and having the desperate need for acceptance and affirmation so common in the young. This is especially true for those who come from weak or broken family support structures so common among the poor. In addition, Brazil’s well-known attitudes of machismo, taking advantage and promiscuous male behavior justified in their minds that there was nothing particularly untoward in posting photos of themselves and the young victim.

Throughout history, atrocities are committed and then explained, interpreted and even justified in the name of moral and material ideal or lack thereof. Obama visited Hiroshima and while not apologizing for something that happened well before his birth, regretted that technology allowing us to combat disease and understand the cosmos “also can be turned into ever more efficient killing machines”. He went on to say that technological advance “without an equivalent progress in institutions can doom us.” Certainly, the technology available to the killer in Orlando doomed the victims and increased their number. The rape in Rio was low tech but the posting on the Internet reflected their alienation and need for affirmation.

Brazil has glaring institutional deficiencies as does the US. Those desperately uncomfortable with themselves, their lives and their futures, commit with the help of technology wanton and desperate acts of abuse, rape, death and destruction on great scale and with sickening regularity.

Astounding technological and material improvement has not overcome and may have instead helped a degraded culture of ignorance and destruction.   Manifestations may take different forms. In Brazil, we have massive gang and individual levels of violence leading to a deluge of rapes, assaults and murders. In the US, we have an ongoing rampage of mass violence including rape and murder. In both countries, the result brings anguish and questioning.

Our recognition of these tragic events and our ability to mourn and question hopefully still indicate that our consciences have not been completely seared.

Maybe the best some of us can do is to act according the Hippocratic oath. Though we may not like or want to be together, we still need to believe in our hearts that if we cannot do good, we should at least avoid doing harm 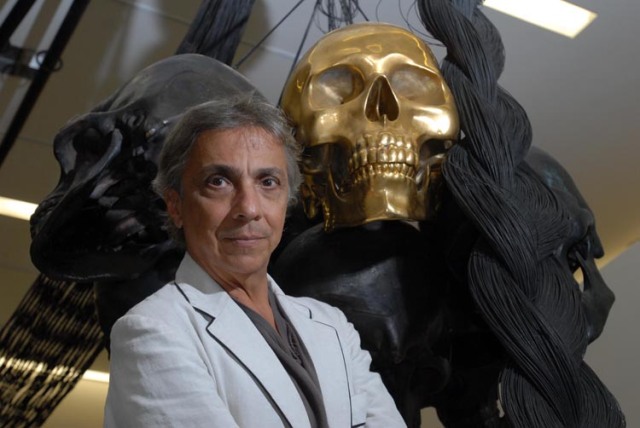 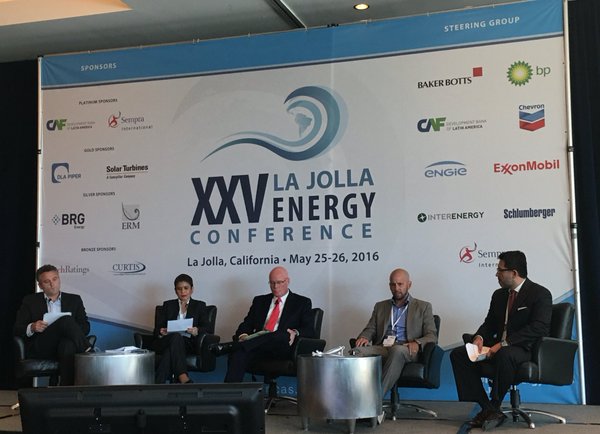 The 25th annual La Jolla Energy Conference (www.iamericas.org/lajolla) sponsored by U.C. San Diego’s Institute of Americas ended May 26. The event brought together more than 35 public and private sector speakers. Investors, attorneys and business leaders from the US, Mexico, Brazil, and numerous other countries in the Americas attended. The conference provided information on energy policy and its direction in Latin America and specific countries. Technologies, economic trends and energy innovations were discussed, including a demonstration of electric vehicles.

Changing policies and a more welcoming environment for foreign investment was a major area of interest in Argentina, Brazil and Mexico. Argentina’s new government is making a major shift away from Cristina Kirchner’s nationalistic energy policies. Daniel Redondo appointed by President Macri to head the Secretariat of Strategic Planning spoke on Argentina’s “Energy Reset and Renewal”. The new government is seeking some 150 billion dollars of investment over the next 10 years. Much of this will go toward the Vaca Muerta fields.

Mexico also has opened its energy sector to foreign investors through auctions for both onshore and offshore production. The first auction generated little foreign interest. But Mexico has persevered and has attracted more foreign and national investors in subsequent auctions.

A representative from Brazil’s energy giant Petrobras – Orlando Ribeiro – attended the La Jolla conference. This was noted as Petrobras has been absent from La Jolla in recent years. Rebeiro is the general manager of Libra Asset Development, which manages Brazil’s largest and most productive offshore oil fields. The fields produce almost half of Brazil’s total oil output. Ribeiro pointed to the increased productivity of Libra’s deep-sea wells and to the current lifting cost of around US$ 8.00 per barrel. While Libra’s cost of operation is heartening in isolation, it is also important to note that Fitch Ratings handed out a press release at the conference about the downgrade of Petrobras stock to BB (EXP) or speculative “junk” status.

The downgrade of Petrobras illuminates an issue that loomed in the background. None of the panels directly addressed Petrobras’ downgrade or the corruption, mismanagement and political use of the energy sector by partisan sectors in Brazil and elsewhere. But speakers such as Duncan Wood, from Princeton’s Woodrow Wilson Mexico Institute said that PEMEX, like Petrobras, suffered from corruption, lack of transparency and a deep insularity that inhibit self-criticism. Because of the changes in government (Argentina and Brazil) and the constraints imposed by reduced oil prices, there is guarded hope and a somewhat sober expectation that private participation can lead to better management and the fulfillment of social demands for more accountability and productivity in the energy sector. In Brazil, for example, the Pre-salt wells were suppose to pay for education and socio-economic growth. But they have so far failed because of the perfect storm of low energy prices, corruption and government instability and mismanagement.

Jeremy Martin and Jamal Khokhar deserve kudos. Jeremy has directed the Institute of America’s Energy Desk for over 10 years and his depth of knowledge and breadth of contacts contributed immensely to the success of the La Jolla event. Khokhar recently became the Institute’s president. He was instrumental in using his prestige and contacts as former Canadian Ambassador to Brazil to bring sponsors and participants, making the conference a success.