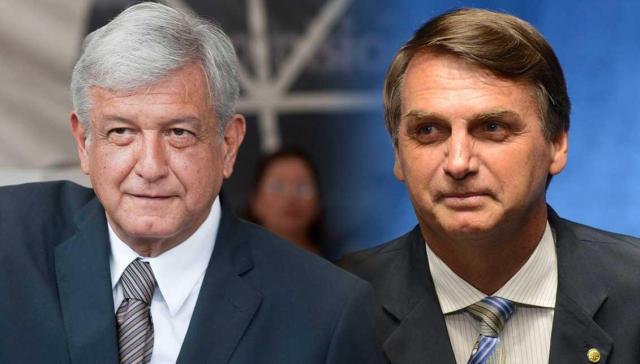 On New Year’s Day, former Army Captain Jair Messias Bolsonaro (JB) will be sworn in as Brazil’s new president. At the same time, Andres Manoel Lopez Obrador (AMLO) will also complete his first month as Mexico’s chief executive.  Brazil, in spite of its downturn, is still Latin America’s largest economy and Mexico while having grown a bit more steadily is the second largest, and by far US’s largest trading partner in Latin America.

The political changes in both countries are significant.  With AMLO, Mexico has elected its first leftist leader since the 1930’s.  Brazil, on the other hand, has turned to the right with Bolsonaro after twenty plus years of socialist and social-democrat leaning governments.

Interestingly, both Lopez Obrador and Bolsonaro used similar rhetoric in achieving their substantial victories at polls.  In Brazil, the right achieved nearly 56% of the popular vote in the second round against the PT’s (Workers Party). Fernando Haddad as former President Lula could not run due to his conviction on charges of corruption.  In Mexico, AMLO claimed about 53% of the vote in a field of 4 major candidates.

Both JB and AMLO are populists and appeal to the “people” shouting nationalist and my country first slogans, much like Trump with his MAGA sloganeering.  All three politicians want to appeal to the ideal of national greatness rooted in the character of people and their struggles against the traditional elites that have openly and surreptitiously been exploiting and extorting for years but now can be saved by integrity, intelligence, honesty, hard work and forthright action of the new leadership in concert with the backbone of the nation.

Bolsonaro has been in Brazil’s Congress for nearly 30 years but only achieved notoriety for his ardent support of the military governments of 1964 to 1985, his defense of torture, his attacks on women, gays and minorities, and his tough verbal stance on corruption and crime.  Although Bolsonaro is a traditional politician, he positioned himself as an outsider and indeed he was not a member of any of the three political parties that have dominated over the past 20 to 25 years.

Likewise, AMLO presented his case directly to the people railing against corruption and impunity of the traditionally dominant PRI political party and against the PAN the traditionally “safe” foil to the PRI.  This was AMLO’s third attempt at Mexico’s presidency and he undoubtedly showed a defter touch to become the favorite of the Mexican electorate.  He promises to reduce violence by talking of amnesty in the war on drug cartels, he plays to the teachers by promising to reverse reforms demanding exams and competence in education, and by providing more resources to students and higher pensions for the elderly.  All this he promises can be done by eliminating waste through the reduction of the top salaries of public servants including his own.  He plans to sell the luxurious presidential plane. He also has scrapped the multi-billion-dollar development of the new airport for Mexico City.  Distinct from Bolsonaro, AMLO has vouched for minorities and the indigenous population of Mexico.

Bolsonaro presented himself as a crusader for family values dear to the emergent evangelical population and Brazilian traditionalists.  He argues that he as a military man wields moral and material authority and can eliminate the corruption that stains Brazil.  He calls on the people to support his crusade for Brazil’s Christian majority and their desire not to be trampled by the so called “politically correct” minority demands for rights as blacks, women or homosexuals.  Instead JB states he will end the culture of “pampering” minorities.  And, most Brazilians apparently have faith in the election slogan that reads: “Brazil above everything and God above all.”

On economics and production, Bolsonaro has confessed his lack of knowledge and made Paulo Guedes, a Chicago School economist his “super minister”.  After years of socialist leaning central planners in charge of the economy, Brazil’s private sector shows a strong liking for Guedes proposals to reduce the presence of the state and free up market forces through reduction of red tape and the selloff of state controlled enterprises, even in the energy sector, which has always been a national treasure.

AMLO’s economic team, in turn, is made up of relatively unknown technocrats and the President has pointedly stated that the people are in charge, not the markets.  AMLO’s victory   unsettled financial elite but things have more or less stabilized since his inauguration and the initial signing of the new trade agreement with Canada and the United States, sometimes called NAFTA II.  After only a month in power, business and markets are still in a wait and see mode.

However, AMLO likes to use popular referendums and so called super delegates.  In the case of the new airport, for example, AMLO essentially used limited polling to justify quashing the 13-billion-dollar project.  Super delegates are his Morena party appointees that will be in charge of the execution of federally funded projects and obviously will compete with local authorities.  Both of these “innovative” means of governance create concerns for investors.

In Brazil and Mexico, there are numerous risks with the election of populist candidates.  Bolsonaro, in particular, has no prior experience in economics, management or public administration.  His rise has been as meteoric as it has been unexpected.  It is true that the market, industry leaders and agriculture have put faith in Guedes, the Finance Minister and in crusading judge, Sergio Moro, the new Justice Minister.  Still Guedes background is mainly in finance and not production and neither he nor Moro have run large organizations.  Politically, JB’s limited political negotiation skills will be severely tested as he needs to get major reforms through a fractious Congress, the most pressing of which is the Social Security system’s reorganization.

In Mexico, AMLO’s biggest challenge will be keeping the faith of the Mexican elite.  He has super majorities in Congress, but his announced three-year moratorium on new foreign investment in the oil sectors is viewed as a return to the 1970’s when PEMEX and oil production were the major source of income for the country.  With oil prices in the 40 to 60 dollar per barrel range, there will not be enough income for the many populist and pet projects.  Mexico’s Central Bank is autonomous and its major concern is controlling inflation.  If foreign investment shrinks, that challenge will be more difficult.

Immigration is another crisis that can have a major negative impact.  Northwestern Mexico is currently carrying the burden of thousands of Central American immigrants seeking entry into the US.  Brazil, in turn, shares a border with Venezuela and Venezuela’s economic crisis has led to a federal intervention in the state of Roraima.  Bolsonaro has declared his enmity with Venezuela’s President Maduro. Maduro could create a situation similar to that of the Marielitos fleeing Castro’s Cuba in the 1980’s leading to an even larger rush of immigrants into Brazil.  Roraima’s public services have already been overwhelmed by tens of thousands of Venezuelan refugees which are only a small portion of those that have fled the country thus far.

Thus while there is hope in Mexico and Brazil for the new administrations, the deep lying structural problems and the limitations of personality based leadership will certainly emerge.  Both Mexico and Brazil are strong and resilient, but institutions need building and it remains to be seen if the projects of the right in the case of Bolsonaro or of the left in the case of Lopez Obrador can find firm footing in a rapidly changing globalized economy.